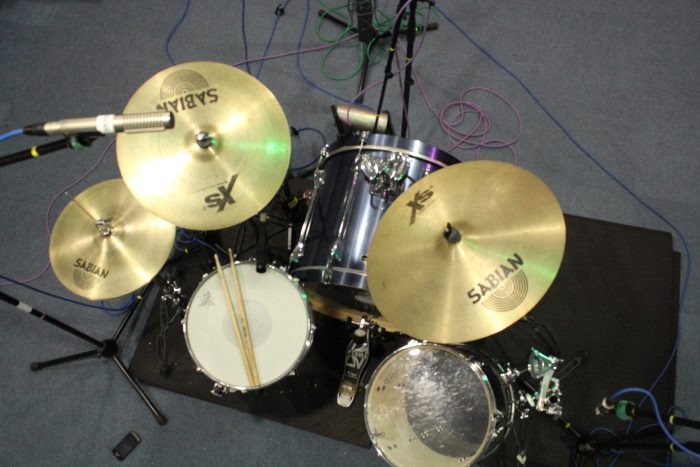 This was a collaborative project to create a cover of A Tribe Called Quest’s song “Butter”. This project was undertaken to demonstrate the full procedure of the recording and mixing process. The final mix was also expected to achieve a high standard, which could be considered for radio broadcast. Also part of the brief was that the recording was to be a version of a pre-existing song. This gave limitations but also a useful starting point for comparisons. The original track was recorded and mixed by Bob Power (Power, c.2012). If you want more info into the recording process, keep reading!
Listen to our version here:

The guys I collaborated with on this are great musicians in their own right, check out David’s work here:

In order to achieve a creative context, the original song had to be analysed. Through this analysis, a few conclusions were drawn. The song features music sampled from other works. For instance, the drums were taken from a 1960’s Motown Track, I Like Everything About You by Chuck Jackson (Jackson, 1968). The use of material recorded with early techniques coupled with Butter being produced more than 20 years ago gave the track a tape-like sound.

Given this analysis, it was decided that the version created would attempt to imitate the sound of each aspect of the track. It would however be impossible and futile to recreate the track exactly. This means that any differences which do occur would inherently be due to the artistic influence of the creators.

The recording was undertaken with the desire to get the required sound of each instrument through efficient microphone technique and choice.

The overhead microphone technique used was the Glyn Johns Method which utilises a mic above the centre of the snare and the other off to the side with the same distance from the snare. This meant that a choice could be made to use a mono microphone technique with the first microphone if necessary. This would be used in an attempt to recreate the Motown drum sound on the record the drums were originally sampled from.

Another notable element was the use of microphones both inside and outside of the kick. This type of decision was to give a choice in the mix as well as adding different perspectives which could be used together.

A fairly close room microphone (Neumann U87) was also used. This was originally positioned further away but this picked up too much sound of a room which didn’t have the right characteristics. Instead, the microphone was positioned closer to use as a source for picking up the whole kit.

A saxophone was recorded with two microphones. One MD421 was positioned fairly close to the bell and a more distant (about 1m) C414c was also positioned. It was thought that a combination of these signals would produce a satisfactory result.

An electric bass was recorded through DI which meant that the raw signal could be affected within Reaper.

During the mixing stage, multiple computer generated musical elements were added to the track. These include the sampled 808 kick at the beginning of the track, all of the keys and layered snares.

Perhaps the most difficult aspect to control was the drums. This was largely due to the dull sounding room and kit. The sound aimed for was one which emulated the sound of analogue tape.

The individual elements of the kit were isolated with EQ and gated where necessary and the aforementioned layered snares added. On top of this, a low level signal of generated noise was added and side-chained to occur when the snare hits. This gave a feeling of tape hiss. The high frequencies of the kit as a whole were also taken away with a high shelf EQ, again emulating the effects of analogue tape. The final aspect of tape which was emulated is the compression which occurs. Instead of compressing the whole mix, the room and overhead microphones were very heavily compressed to achieve a ‘crushed’ sound. The level of this could then be raised to create an appropriate blend of compressed and uncompressed signals.

The resulting drums have a very good sound and the emulation of tape is fairly effective. The room microphone does however show off quite a lot more of the room than desired when compressed heavily. Upon reflection, a re-recording of the drums in a large but controllable space as the early Motown recording will have been achieved would be preferable. This will be considered for future works.

Listening to the overall mix and comparing with the original, it was evident that the track did not contain the same amount of bass content. This meant that a synthesised bass was added but more needed to be done at the mastering stage.

The only technical issues which were found in the mix were a problem with the vocal take and the phase of the keys. The vocals should be the strongest part of the track but unfortunately they are quite weak in places. This was not through lack of trying as many vocal takes were completed. However, through proper coaching and effort, the take could sound a lot better. For this project however, the take was sufficient.

The other issue was that when the Waves PAZ Frequency Analyser was used, anti-phase material was shown. This was found to only be apparent when the keys were introduced. It was concluded that this was most likely caused by the use of multiple synthesisers within Logic to create the sound. When this was realised, the track still sounded good and not much was changed in mono, especially after rolling off the top end. This meant it was decided that this did not need to be changed as the right amount of ‘wrong’ technique was used to obtain the creative goal.

To obtain the much needed pumping bass, a linear phase multi-band compressor was used on the low end to bring out these frequencies in the mix. An EQ was used to sheer off the top end of the track to give the final hint to a tape-like sound. A compressor was then added to the end of the chain to bring up the overall level. Needing to compete with modern tracks, this compression was quite excessive and more subtle techniques should be used by a fully trained mastering engineer for a final master.

The mix sounds very coherent and the most important aspect which is the vocal can be heard easily. Along with this, subtleties such as midi saxophone and extra snares enhance the overall mix. This makes it more pleasant to listen to, giving a ‘full’ sound.

The creation of the tape emulation was the most interesting aspect of the project and techniques learned here will be used in later projects. In terms of whether this track has the chance of appearing on radio, it is believed that the mix is strong enough but the track is let down by a less than perfect vocal take and mastering. These could be fixed by re-recording the vocals and getting a fully trained mastering engineer to finish the track.

Make sure this account has posts available on instagram.com.